The Japanese Veterinary Antimicrobial Resistance Monitoring System (JVARM) is a nationwide monitoring of antimicrobial-resistant bacteria in the animal area, conducted by the Ministry of Agriculture, Forestry and Fisheries since 1999 through its network with livestock hygiene service centers across Japan. JVARM provides globally important information, and is cited as one of the examples of monitoring systems in “Antimicrobial resistance: global report on surveillance 2014,” published by WHO. 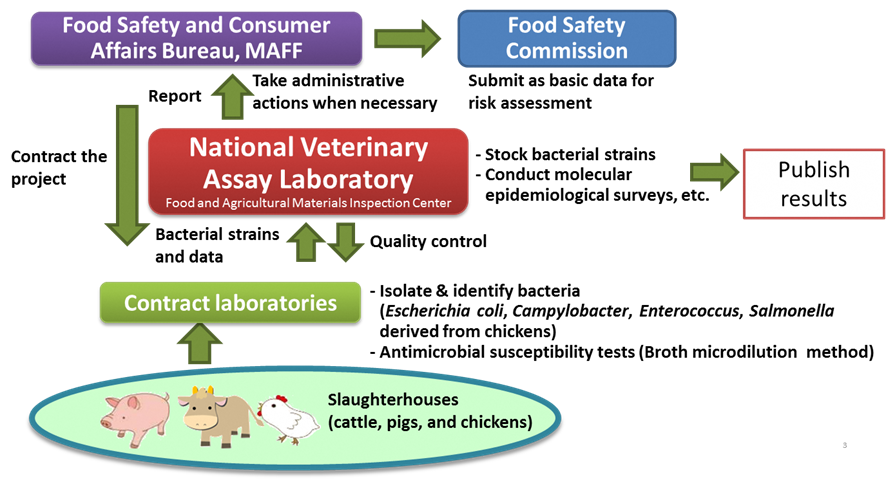 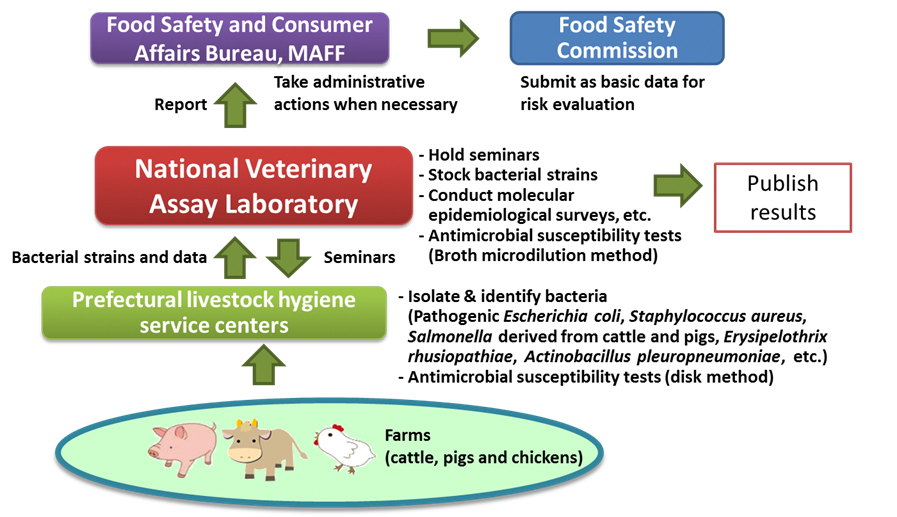 Figure 4. System for antimicrobial resistance monitoring in diseased dogs and cats (from FY2017)

Monitoring details on the volumes of sales of antimicrobials

An annual monitoring is conducted on the volumes of sales of veterinary antimicrobials, based on the reported quantities of veterinary drugs handled by marketing authorization holders, pursuant to Article 71-2 of the Veterinary Drug Control Regulations (MAFF Ordinance No. 107 of 2004). Starting 2001, the scope of monitoring has included the volume of sales by active pharmaceutical ingredient and by the route of administration, and the estimated volume of sales by animal type, in addition to the volumes of sales by antimicrobial type and by dosage form. As is stated in Chapter 6.8 of the OIE Terrestrial Animal Health Code concerning the monitoring of antimicrobial agents used,[35] data are required regarding the volumes of use of active ingredients by animal type, in order to identify and compare the volumes of use in individual countries. Therefore, reports have been issued based on the relevant survey results.
When monitoring began, the volume of sales was in excess of 1,000 tons, but the figure progressively decreased thereafter, with average sales over the last ten years amounting to 795.94 t, while the average for the last five years is 784.79 t (Figure 5). 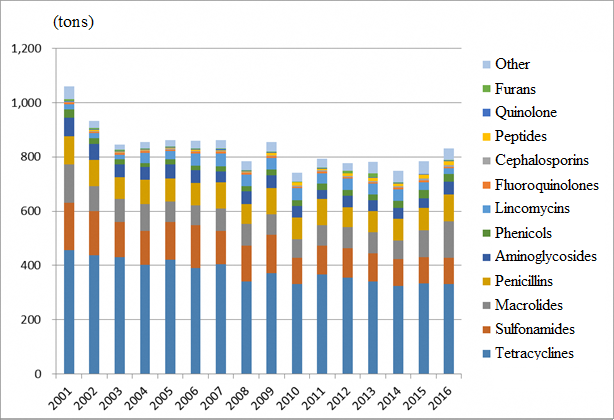 Usage volumes (sales volumes) by weight (tons) are indicated in all fields (including human) from the report. Whereas usage of cephalosporins and fluoroquinolones was higher among humans than in other fields, usage of tetracyclines and aminoglycosides was higher among animals than elsewhere. The total weight of antimicrobial use in agrochemicals was less than in humans or animals, with oxolinic acid and streptomycin accounting for more than half of this.
When evaluating antimicrobial use, it is helpful to compare on the basis not only of gross weight, but also of quantities that take into account the weight of the subject to which they are administered. In the case of humans, the WHO has set a defined daily dose (DDD) and comparisons between humans often use DID (DDDs/1,000 inhabitants/day). However, animal weights vary considerably between one species and another, from chicks weighing just a few dozen grams to dairy cows in excess of 600 kg, so no standardized DDD has been set. Animal weights are therefore evaluated as biomass weight and usage per unit of biomass weight is often used, but the method of calculation is set by each individual country or region, so it is not standardized. However, the OIE has proposed a method of calculating biomass weight for use in collating data on the volume of veterinary antimicrobial use, while the EU has set DDD for some food-producing animals (cattle, pigs, and broilers), so it would appear to move forward the harmonized method for evaluation of antimicrobial consumption.

For the monitoring of clinical isolates, bacterial strains are isolated and identified from materials for pathological appraisal by prefectural livestock hygiene service centers, and the MIC values for these strains are measured by the National Veterinary Assay Laboratory using a broth microdilution method based on the CLSI Criteria. For the monitoring of pathogenic bacteria mediated by food and indicator bacteria, antimicrobial susceptibility tests have been conducted by livestock hygiene service centers since 1999, isolating Salmonella and Campylobacter as pathogenic bacteria mediated by food, and Escherichia coli and Enterococcus as indicator bacteria, via feces from beef-cattle, pigs, and broilers and layers in farms. Annual continued education is conducted at the National Veterinary Assay Laboratory in order to standardize the isolation and identification of bacterial strains and antimicrobial susceptibility testing. National Veterinary Assay Laboratory also conducts monitoring regarding source farms of samples, dates of sampling, the status of use of therapeutic antimicrobials and antibiotic feed additives, and so on. As described in the later in the section, sampling locations for the survey of pathogenic bacteria mediated by food and indicator bacteria were switched from farms to animal and poultry slaughterhouses in FY2016.
As of 2017, the scope of monitoring broadly includes active ingredients that are considered important in antimicrobials for animals, for both animals and human health, and antimicrobial feed additives: ampicillin, cefazolin, cefotaxime, streptomycin, dihydrostreptomycin, gentamicin, kanamycin, erythromycin, tylosin, lincomycin, tetracycline, oxytetracycline, chloramphenicol, colistin, bacitracin, virginiamycin, salinomycin, nalidixic acid, ciprofloxacin, enrofloxacin, and trimethoprim. Antimicrobial agents subject to monitoring are selected for each bacterial species, according to the past monitoring results and Chapter 6.7 of the OIE Terrestrial Animal Health Code.[36]
The survey method used for the 2017 surveillance of companion animals was informed by the results of deliberations by the Working Group for the Surveillance of Antimicrobial Resistance (AMR) in Companion Animals. Gram-negative (Escherichia coli, Klebsiella spp., and others) and gram-positive (coagulase-positive Staphylococcus spp., Enterococcus) bacterial strains isolated from the urine, reproductive organs, skin, and ears of diseased dogs and cats were gathered from clinical laboratories and sent to a contracted laboratory, which used a CLSI-based method of broth microdilution to measure the MIC. The survey focused on both the antimicrobials included in the surveillance of food-producing animals and other antimicrobials used on companion animals in clinical settings, namely the following: ampicillin, oxacillin (Staphylococcus spp. only), cefazolin, cephalexin, cefoxitin (Staphylococcus spp. only), cefmetazole (gram-positive bacteria only), cefotaxime, meropenem (gram-negative bacteria only), streptomycin, gentamicin, kanamycin (gram-negative bacteria only), tetracycline, chloramphenicol, erythromycin (gram-positive bacteria only), azithromycin (gram-positive bacteria only), colistin (gram-negative bacteria only), nalidixic acid, ciprofloxacin, fosfomycin (gram-negative bacteria only), and sulfamethoxazole-trimethoprim (gram-negative bacteria only).

System for the antimicrobial resistance monitoring

Currently, there are 170 prefectural livestock hygiene service centers across Japan, which have cooperated in establishing the nationwide JVARM network. For the monitoring of clinical isolates, bacterial strains are isolated and identified from diseased animals by livestock hygiene service centers, and the MIC values for these strains are measured by the National Veterinary Assay Laboratory (Figure 3). From 2000 to 2015, pathogenic bacteria mediated by food and indicator bacteria derived from healthy animals were isolated and identified from the feces of specified animals, and subsequently the relevant MIC values were measured, by livestock hygiene service centers. The submitted data were aggregated and analyzed by the National Veterinary Assay Laboratory, and were published as JVARM data.
In contrast, animal and poultry slaughterhouses have been selected as sampling locations for antimicrobial resistance monitoring in Europe and the U.S., since they are proximal to food and are capable of more integrated collection of feces. The Food Safety Commission of Japan’s Food Safety Risk Assessment of Resistance to Fluoroquinolone Antimicrobials Used in Cattle and Pigs (March 2010) called for the establishment of a comprehensive antimicrobial resistance monitoring system capable of offering epidemiological assessment and testing. Accordingly, sampling of feces from healthy animals commenced in animal and poultry slaughterhouses in FY2012 (Figure 2); when the results were compared with those from feces sampling on farms, no major differences were found in antibacterial resistance rates, MIC50, or MIC90 among Escherichia coli and Campylobacter strains isolated in FY2012 and FY2013. Sampling of feces on farms was therefore discontinued in FY2016 and efforts to monitor food-borne pathogenic bacteria and indicator bacteria from healthy animals switched to sampling at animal and poultry slaughterhouses.
Isolated strains collected under JVARM are examined and stocked by the National Veterinary Assay Laboratory, which also performs the analysis of genetic properties and the clarification of antimicrobial resistance mechanism, in order for the molecular epidemiological survey of antimicrobial-resistant strains. Antibiotic feed additives are analyzed by the Food and Agricultural Materials Inspection Center (FAMIC). Data collected through JVARM are published on the website of the National Veterinary Assay Laboratory every year. The data are also utilized for risk assessment by the Food Safety Commission as well as for science-based risk management measures.

Monitoring on the sales volumes of antimicrobials

Each marketing authorization holder of veterinary drugs annually submit, to the National Veterinary Assay Laboratory, the sales volume of antimicrobials from January 1 to December 31, using a designated reporting form. The data are aggregated and published on the website of the National Veterinary Assay Laboratory as “Annual Report of Sales Amount and Sales Volume of Veterinary drugs, Quasi-drugs and Medical Devices.” (Figure 6) 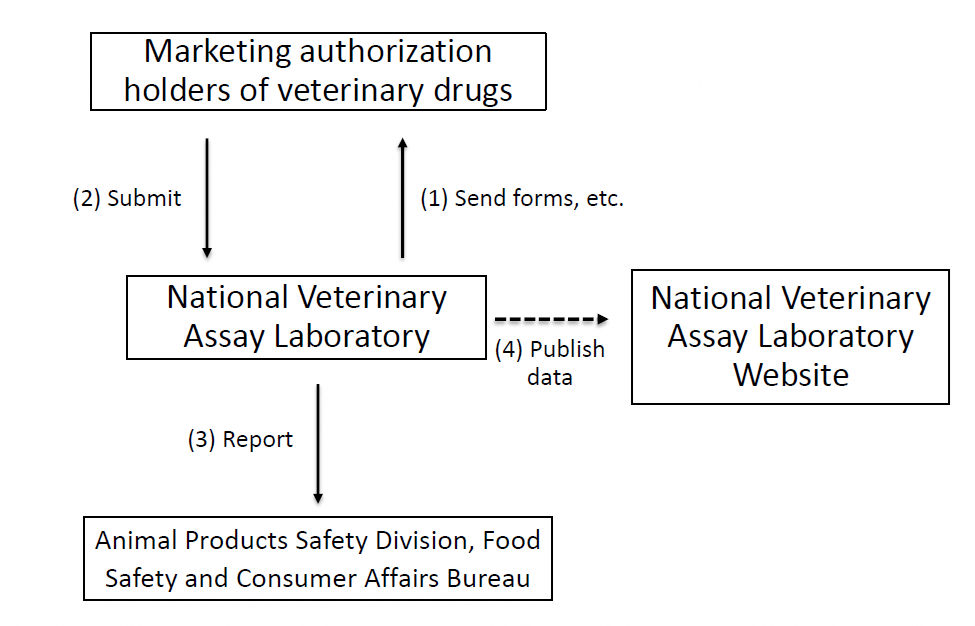 Since FY2012, collaboration has been promoted between JVARM and JANIS (Japan Nosocomial Infections Surveillance). The data of Escherichia coli derived from healthy animals collected under JVARM are converted into a format comparable with JANIS data, and the results are published as antibiograms on the website of the National Veterinary Assay Laboratory.[37] These data enable the comparison of trends in antimicrobial-resistant bacteria between humans and animals. 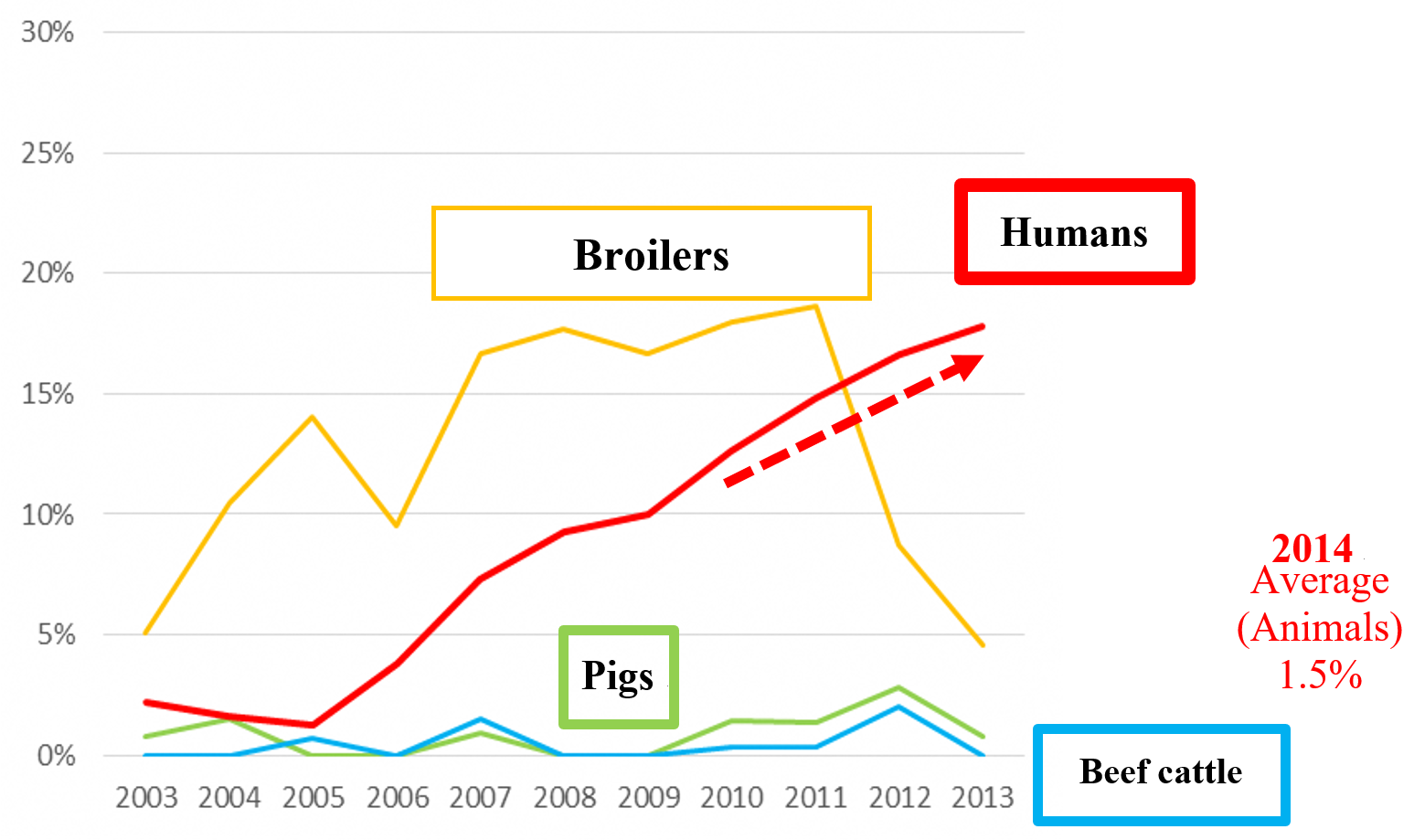 The proportion of third-generation cephalosporin-resistant strains derived from humans and those derived from broilers had an increase trend until 2011. The proportion, however, has rapidly decreased in broilers since 2012. This is probably due to the withdrawal of the off-label use of the third-generation cephalosporin after the explanation of the JVARM data to related associations. [38] On the other hand, the proportion still continues to rise in humans, indicating different trends between humans and broilers. 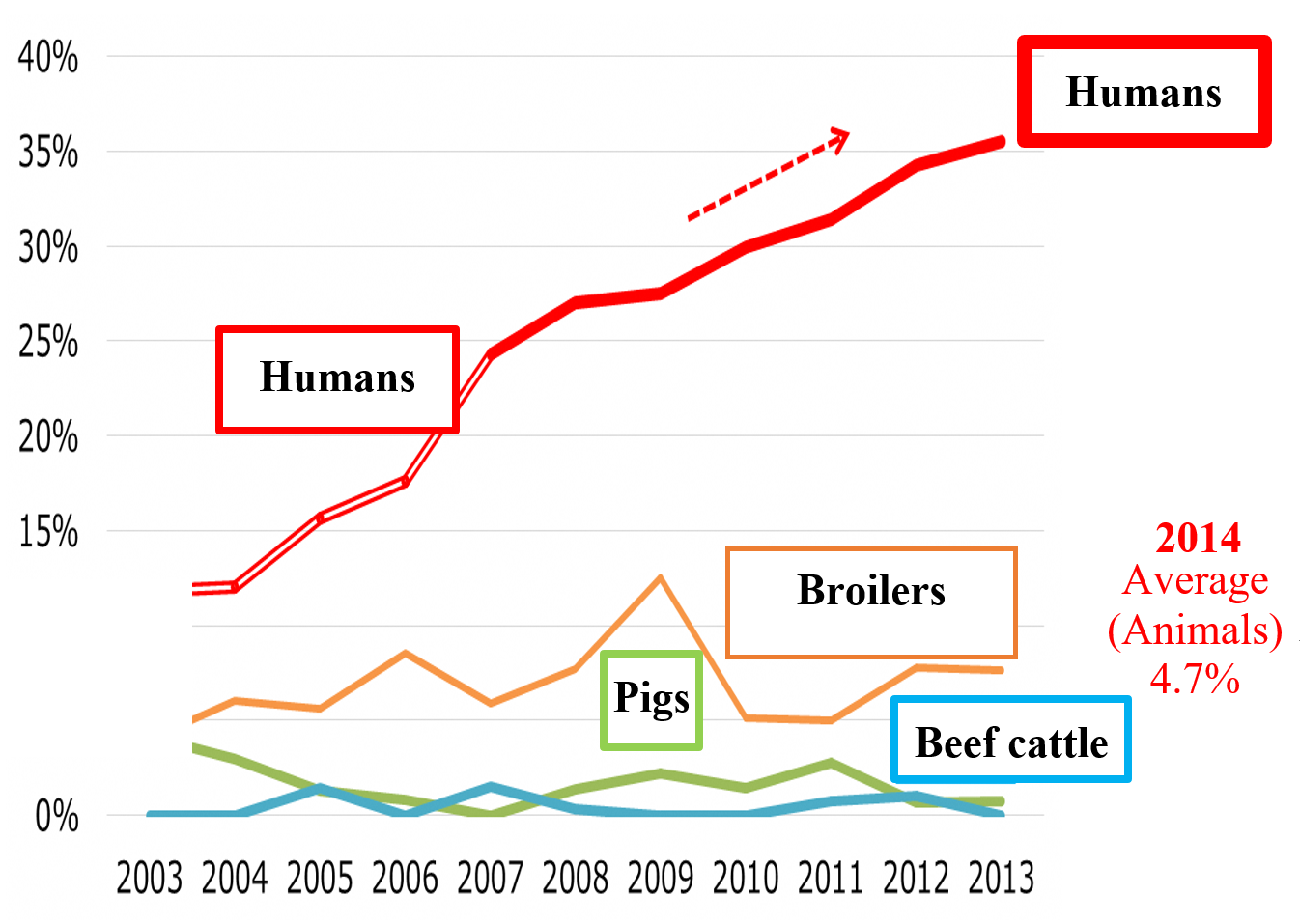 JVARM still faces three key tasks: 1) monitoring resistance in strains derived from healthy companion animals; 2) conducting more advanced surveillance and analysis of antimicrobial resistance genes (ARG) by such means as whole genome analysis; and 3) monitoring the usage of human antimicrobials in companion animals. While continuing to carry out monitoring in existing veterinary fields, JVARM will move forward with monitoring focused on these tasks in 2018. To further promote One Health monitoring, further collaboration with JANIS will continue to be pursued through comparisons of whole genome analysis data. Those data accumulated will lay the ground for risk assessment and risk management, by clarifying the transmission process of antimicrobial-resistant bacteria, through linkage with other areas.